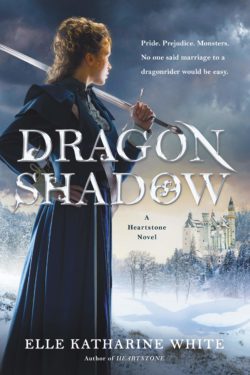 Aliza Bentaine and Alastair Daired are now married. However, their honeymoon is cut short due to an urgent matter at the kingdom’s northern border that requires a dragonrider’s expertise. Aliza manages to persuade a reluctant Alastair to allow her to accompany him and his dragon Akarra on their journey. An ancient and unidentified monster follows the newlyweds to Lake Meera. The heartstone-stealing creature is not the only foe Aliza and Alastair must face. What secrets will Aliza unearth? Can a weakened Alastair keep his wife safe from unknown dangers?

Alastair is also adapting to married life and the changes brought on from his encounter with the lindworm. He has a rough time at first, especially with his Rider’s instinct to protect and keep Aliza safe from danger. I like how Alastair and Akarra work in concert with Aliza. They are aware that her strengths and skills lie off the battlefield, and they accept that she will never be battle-savvy like they are. What I love the most about Alastair is how he shares his vulnerable side to his wife. He trusts her enough to bare all his secret insecurities, doubts, and fears.

Aliza has really grown since book one, HEARTSTONE. She is slowly assimilating to her new life as a noblewoman and a dragonrider’s wife. I admire Aliza’s determination to protect her warrior husband, even though she is a pacifist and a healer. She understands she will never know the battlefield as her husband does, yet she still insists on sharing Alastair’s burdens. What I adore the most about Aliza is the compassion she shows to the Tekari despite her fear of them and their cruel tendencies. Her empathy does sometimes contradict Alastair’s Rider ethnics.

DRAGONSHADOW is book two in Elle Katharine White’s fantasy romance series, HEARSTONE. The book can standalone; however, it is better to read the prior book to understand Aliza and Alastair’s dynamics. I like how the author moves away from the PRIDE & PREJUDICE theme to explore not only her vivid world but her characters’ lives as newlyweds.

DRAGONSHADOW is a spellbinding tale of love withstanding all sorts of difficult trials. I love how the author’s writing style transported me to this fascinating world. I cannot wait to read more of Alastair and Aliza’s perilous adventures.