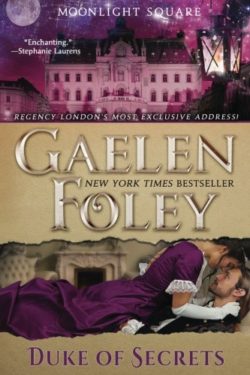 Azreal Chambers, the Duke of Rivenwood, is well known for his reclusive eccentricity. He wants nothing to do with his late father’s diabolical cult. Azreal bumps into his former betrothed when the headstrong minx steals into his home. He reluctantly agrees to assist Serena in her search, only to keep the beautiful temptress from the cult’s notice. Azreal fights his growing attraction to the beguiling woman. He dreads revisiting his past demons, yet Serena’s presence helps him exorcise them for good. Can Azreal evade the dark destiny he was born into?

Lady Serena Parker receives some disconcerting information about her parents. She sneaks inside Azrael Chamber’s home in search of clues of her birth father’s identity. The handsome yet eccentric duke enlightens Serena to even more of her parents’ secrets. She manages to cajole Azrael’s help in her desperate endeavor. During their excursion for the truth, Serena learns more about the solitary duke. Will Serena learn the truth she desperately seeks? And at what price?

I love the uniqueness of Azreal’s name, although I never knew its meaning until this book. It is so eye-catching and different from the usual, common names found in historical romances. Azreal swiftly claimed my heart. I empathize with his reasons for keeping people at bay and his inability to trust after all he suffered from his late father and then his guardians. I admire Azreal’s ingenuity of deceiving his guardians and father’s occult lackeys into believing he was too mentally damaged to join their immortal ranks. I like how Azreal strives to become his evil and cruel father’s opposite.

Serena steadily grew on me. At first, she came off as too selfish and self-absorbed for my tastes. However, the more Serena interacted with Azreal and learned about the horrors he endured, she changed for the better. I adore how she picked up on his discomfort at public scrutiny and used her charms to garner the attention onto herself. She won me over with her show of generosity towards the lower class. But what I like the most about Serena is that the promise of her love gave Azreal the needed push to fight for their possible future happiness.

DUKE OF SECRETS is book two in Gaelen Foley’s historical romance series, MOONLIGHT SQUARE. I like how the heroes from the prequel and first book are mentioned in this story, giving hints of their lives. The heroes from the author’s THE INFERNO CLUB series also make appearances in the story, but unfortunately I’m unfamiliar with that series.

DUKE OF SECRETS is a transfixing, suspenseful story of love giving one the impetus to fight their dark destiny. I love the Gothic vibe the author infused into the story-telling. I cannot wait for the next Moonlight Square resident to find their happily-ever-after.