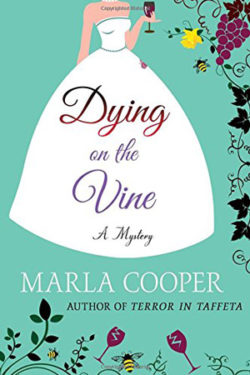 DYING ON THE VINE is a stylishly hip murder mystery series starring saucy wedding planner, Kelsey McKenna, and her dedicated assistant, Laurel, along with photographer friend Brody. While Kelsey is at a wedding fair helping out her friend Brody, she is hired by an engaged couple who want to be wed at the exquisite Higgins Estate in California wine country. This is her lucky day! Or is it?

When Kelsey finds out later that the bride-to-be’s father fired Babs Norton, the exclusive wedding planner of Wine Country weddings, from handling his daughter’s wedding due to conflicts, Kelsey is wary. Okay, her and Babs get along, but she doesn’t want Babs to think she swiped her client. Well, Babs’ assistant, bossy, vocal Stefan, thinks differently. Actually, he is outright hostile and accuses Kelsey of stealing their customers. Kelsey decides the best thing is to explain the situation to Babs at her office. Hopefully, she can get information on the vendors Babs used for the couple’s wedding day too. Only, Kelsey is horrified! She discovers Babs’ horizontal stiff dead body on her office floor.

Who would kill Babs? Stefan suspects Kelsey and doesn’t waste time publicly humiliating and labeling her a killer at Babs’ funeral. Kelsey is stunned and hurriedly makes tracks to clear her name before her business is washed-up. Kelsey and Laurel tackle testy winemakers, gossipy, opinionated people, and organize a wonderful wedding for an engaged couple at the last minute, all the while cagily sleuthing to find who bumped off Babs. Will Kelsey need a restraining order against Stefan? Does Kelsey and gang uncover the murderer before they can say, Saluté, to the married couple?

DYING ON THE VINE is a topnotch murder mystery filled with plenty of high-jinks, suspenseful situations, and is cleverly plotted. The author, Ms. Cooper, presents a humorous second book in this fast-paced wedding planner murder mystery series where Kelsey and friends try to solve the case of who bopped Babs to death. I absolutely adore Kelsey, who creates destination weddings to die for and sneaks in amateur sleuthing on the side. Kelsey boldly goes where wedding planners have never gone before! The author scores big with this unique cozy mystery. Ms. Cooper creates a brilliant palette of people with a myriad of personalities. There are bossy, irritable winemakers, back-stabbing, opinionated wedding planners, comical wedding couples along with a lively plot that will keep readers guessing as to who did it. I couldn’t wait to see who was the guilty party! The author hid the clues well as to the identity of the killer, among the many problems dealing with a wedding on the fly. DYING ON THE VINE is a fresh, witty murder number that sparkles with a splash of sass, suspicions and secrets. Absolutely brilliant!