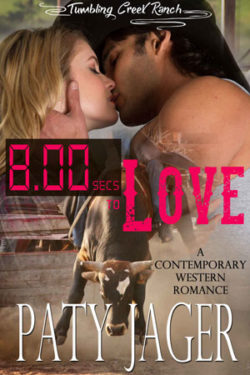 EIGHT SECONDS TO LOVE is Jared and Lacey’s story, and what a story it is! Lacey has had a crush on Jared since she was a teen and always followed him and her cousin, Brett, around. Their paths cross years later when she’s in the hospital after a bull riding accident, and it’s an interesting reunion. He’s now a nurse in an ER, and she’s been a bull rider for ten years. She’s worked hard trying to make it to the top in a man’s world but isn’t getting much support from her parents and others. Jared hates that Lacey wants to go back to the bull riding finals even though she’s injured and needs surgery. She doesn’t want to hear it. Watching them take one step forward and two steps back was heart-wrenching, but watching their feelings for each other grow was wonderful. There are twists and turns to the story with a nice flow and a depth to the characters. The vivid scenic descriptions made me feel like I was there. The story didn’t play out the way I expected but left enough loose ends for more stories, since this is the first book in the TUMBLING CREEK RANCH SERIES. I can’t wait for more in this series.

EIGHT SECONDS TO LOVE was originally published in the COWBOY DREAMIN’ boxed set. This story was definitely my favorite book in the anthology. I’ve read books before by Ms. Jager and look forward to reading many more, not just in this series.