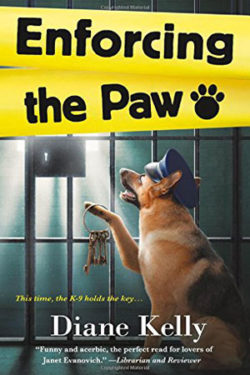 In Diane Kelly’s new novel in the PAW ENFORCEMENT SERIES called ENFORCING THE PAW, two ticked-off ex-lovers veer into abusive territory when one takes a walk on the sinister stalker side. It is up to top notch police officer Megan Luz and her trusty pawkick, police dog Brigit, to solve this prickly pickle puzzle of who is stalking who. Each mate has evidence of vicious mischief on the other and valid accounts to their whereabouts. Confound it all, who is the real scheming stalker? Edgy action, conniving characters and a heaping dose of diversion tactics, provides the perfect perplexing plot. Will Megan and Brigit dig up the dirt on the two-faced, lying culprit? Or will they bark up the wrong tree?

ENFORCING THE PAW is a real page turner with credible characters, clever clues and chuckles galore. Megan and Brigit are forced to use all their resources as they race to find the scary stalker turned vengeful loon before things spiral out of control. All the regular characters are in here along with a sprinkling of romance and laughter. This is a less dangerous case from Ms. Kelly but no worries, she provides tense situations and deviousness to the extreme. Megan, ace detective, is a spirited sleuth and tries to solve her most mind-boggling case ever. With her best friend at her side, Brigit, and her handsome boyfriend Seth offering his support, Megan waits, hoping for the true perpetrator to tip their hand, then she can make an arrest. Watch out though, the author throws in many curve balls. You won’t know who it is until the very end! Exceptionally brilliant plotting! ENFORCING THE PAW sizzles just like a Pina Colada. It’s a little sweet, refreshing but has a lot of punch!