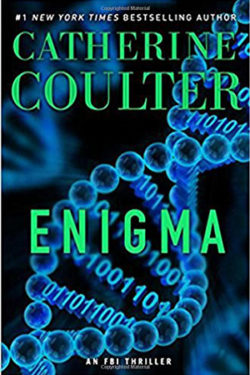 ENIGMA is an exciting read following FBI Agents Sherlock and Savich as they work on two cases at once. Case one is to try and determine what the connection is between a mysterious and unconscious John Doe and the pregnant woman he was trying to kidnap, whose baby has now been kidnapped from the hospital.

Case two is the escape of the violent criminal and convicted bank robber known as Manta Ray as he was being delivered to the federal penitentiary. The safe deposit box he stole during a violent bank robbery was never recovered. Is there something so important inside the box that breaking him free is worth his release? As his rescuers run from law enforcement taking him deep inside the Daniel Boone National Forest, FBI Agents Wittier and Cabot are hot on their trail.

Just when I thought I had things figured out, the story twisted in a direction I never saw coming. The previous FBI Novels written by author Catherine Counter were a joy to read, and this newest book does not disappoint. If you love puzzles, you will enjoy trying to solve ENIGMA.  A great read!