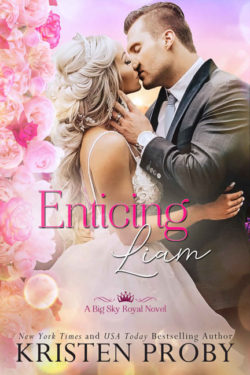 Let me start my saying the cover of ENTICING LIAM is absolutely beautiful. The pink is so pretty and definitely makes a romantic statement. Kristen Proby has penned another attention-grabber with this second book from the BIG SKY ROYAL series.

Princess Eleanor is a real looker. Most men from her social circle are not interested in her brains or philanthropy, they only see themselves as the next prince. Ellie escapes from her royal duties to her brother’s place in Montana for a little rest and relaxation. She yearns for a meaningful relationship, as well as giving her virginity to the man of her dreams.

Liam Cunningham experienced plenty of action as an Army Ranger, and sometimes his nightmares are hard to shake. Now he is the head of security for the royal family at their estate in Montana. He loves his job and takes it very seriously. Although he is a bit older than Ellie, they have always shared an attraction. Since Ellie has no sexual experience, Liam agrees to show her the ropes. Over time, they fall into lust and love.

This is both an engaging and entertaining romance. I really liked how Ms. Proby matured Ellie’s character. At the beginning of the book, Ellie’s actions were a bit juvenile. As she became acclimated to a less structured lifestyle, developed friendships with women who truly liked her for her, and learned all about good sex, she blossomed. I loved Liam. He was such a good and genuine guy. He was much more than his occupation. In addition, the secondary characters added a lot of interest and fun to the plot. Ms. Proby nicely combines sexiness and drama into this fast-paced romantic read. I am truly looking forward to the next book in the series.