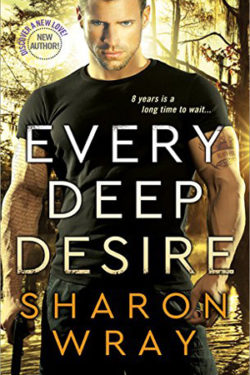 EVERY DEEP DESIRE is a story of love, duty, honor, and betrayal. Rafe Montfort was a decorated soldier until he undertook a mission that resulted in him being accused of running guns and becoming AWOL from the Army. Expecting to spend the rest of his life behind bars, he’s surprised when the charges are dropped months later and he’s mysteriously released from jail. His only thought is to head to Georgia to hopefully reconnect with his family.

Juliet Capel was married to Rafe, the man of her dreams, until he abruptly ended their relationship. She has been working hard to put her life together, opening and running a landscaping business. However, strange things are happening. It looks like someone is deliberately trying to sabotage her business. When she learns Rafe is back in town, she’s shocked. She still loves him but wants nothing to do with him. He almost destroyed her once; she doesn’t want to let him back into her life again. However, Rafe, it appears, has other plans. He needs to find those who are behind the incidents that have put Juliet and her business in danger.

EVERY DEEP DESIRE is a story of duty, honor, betrayal, and ultimately trust and love. If you enjoy puzzles and a thrilling love story, this is the book for you.