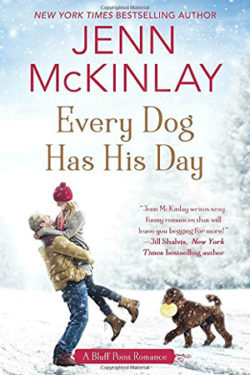 EVERY DOG HAS HIS DAY is a nice continuation of the BLUFF POINT SERIES set in Maine. Rufus, Zach’s dog that he’s fostering for a friend, is front and center along with Chaos, Maddie and Gracie’s cat, that they are also fostering. Maddie and Gracie are the adorable young daughters of Zach’s next door neighbor and divorced single mom, Jessie. Zach and Jessie have an immediate chemistry when they meet again in his backyard as he’s rescuing Chaos from the roof of his house. Neither one is willing to do anything about the attraction since they’ve both been burned in the past. Their first meeting where she works didn’t go so well. There’s a ton of fun going on each time they’re together with her kids and the animals, but is their relationship doomed from the start?

I loved that we are reunited with Zach’s friends whom we’ve met in BARKING UP THE WRONG TREE, book two in the series. The gang is called the Maine crew, and we get to catch up with their lives and see how they embrace Jessie into the group, even if it does seem fast. The Maine crew are always there for each other. The friendships are portrayed realistically, and the characters all have depth to them. There are things from their past that we learn a little at a time. Jessie’s in-laws are in the thick of things, although her father-in-law, the judge, is not playing fair by any means in regards to the grief he is giving both Jessie and Zach, his granddaughters, and even Chaos! Jessie’s ex-husband is a waste. He’s never around and treated her and the kids shabbily when they were married. Yet none of that stops his dad from laying all the blame at Jessie’s feet.

There are steamy, between-the-sheets moments that happen outside the bedroom too. The story is filled with emotion, secrets, and love. There are a few unexpected twists and ultimately a happily-ever-after that had me going awww since I didn’t see it playing out the way it did! There is nice closure, and I hope we return to Bluff Point since there are more friends that need pairing up, and we need to see the outcome of some of the other loves.

McKinlay is fast becoming a go-to author for me. I still need to read the first book in the series, ABOUT A DOG. She’s written a few cozy mystery series that I look forward to reading as well, and there’s an excerpt at the back of the book for WEDDING CAKE CRUMBLE, from the CUPCAKE BAKERY MYSTERY SERIES, that only whetted my appetite for more!