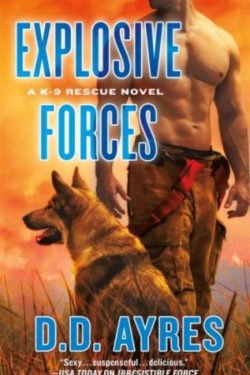 EXPLOSIVE FORCES is the first book I’ve read in the K-9 RESCUE SERIES but it won’t be my last. I need to read the first four books in the series, IRRESISTIBLE FORCE, FORCE OF ATTRACTION, PRIMAL FORCE AND RIVAL FORCES.  All have been added to my always growing TBR list including the next book in the series, PHYSICAL FORCES and the prequel novella, NECESSARY FORCE.

EXPLOSIVE FORCES was a fast paced read reminiscent to me of books by Kat Martin. The characters were multi-dimensional and we got to know them a little at a time.  There were layers to the story especially since crimes had been committed that needed to be solved.  Watching the team connect the dots to figure things out was interesting especially when “Good Samaritan”, ex-model and business owner, Carly, gets into the mix over and over again and gives them some of the details they need.  She and Noah, the accused who is also an arson investigator, have chemistry from the moment they first meet when he’s in the hospital after she rescues him.  Things only got hotter from there even if fires weren’t always involved.

Harley, Noah’s K-9 partner, and Noah’s son, Andy, were a nice addition to the story. There are family and friends, an unknown enemy, crimes to solve, stolen moments, hot and heavy between the sheet moments, anger, frustration, tears, sadness, loneliness, happiness, laughter, good from evil, loving and love. The last chapter, which takes place two months later, acted as an epilogue giving me some of the closure I was looking for but enough loose ends to bring us to the next story.

Ayres is a new to me author.  I will be back to read more of her books.