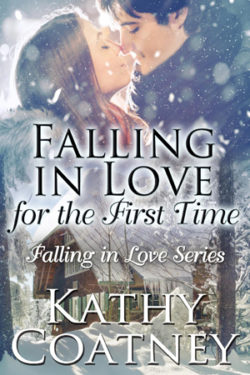 It was nice to return to Paradise Falls, Idaho in FALLING IN LOVE FOR THE FIRST TIME, the third book in the FALLING IN LOVE SERIES. We are reunited with characters we’ve met before and see how their lives continue to unfold.

This is Daniel and Maggie’s story, and it is told in the present and the past. It was confusing sometimes since we had already gone beyond some of what was mentioned as still in the planning stages. All in all though it was usually a smooth transition. We get to know of their attraction to each other, how they started dating, what their lives were like, and where their careers were taking them.

Maggie was best friends with Daniel’s brother, Colin, and they had a special connection and were often in sync without words. Daniel was jealous of their relationship, even though he knew there wasn’t anything romantic between them. Maggie was a nurse with an international organization that went to war-torn countries, while Daniel was in the military in a special forces unit that was top secret. When they returned home, they worked with friends and Colin at Adventure Docs, which is a business dedicated to emergency medical services combined with adventure sports. It was Colin’s idea that Daniel brought to fruition while Colin was still serving in the military.

The story contained several scenes of adventures and medical services, along with Colin’s daredevil acts. The author touches on PTSD and how it affects friendships and families. There are vivid descriptions of the weather, the mountains, and daring adventures that made me feel that I was there. The epilogue tied up loose ends and gave me the conclusion I wanted with a happily-ever-after I didn’t see coming. There seems to be more story to tell though, since we don’t know much about MD and Sloan, friends who are also involved in Adventure Docs.

This is the third book I’ve read by Coatney, and I can’t wait to read more of her books, some which I’ve already added to my always growing TBR pile.