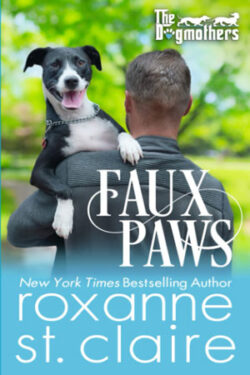 Théodoros “Theo” Santorini is a former Navy Lieutenant Commander. When a job possibility flops, he finds himself unemployed, homeless, and girlfriend-less. On his trek to Bitter Bark, North Carolina, Theo rescues an abused dog. He entrusts the canine to his stepfather’s friend and her companion. Theo cannot ignore his attraction to Ayla; however, he remains skeptical about her special ability. Will Theo allow his skepticism to sabotage his relationship with Ayla? Can he find a reason to stay in Bitter Bark?

Ayla Hollis is the youngest daughter of a business mogul and a socialite. When she learns of her fiancé’s unfaithfulness, she leaves him at the altar and flees with her mentor. Bitter Bark offers Ayla a brand-new start. She decides to embrace her natural ability to communicate with animals and go public with it. Her first patient/case involves an emotionally abused dog and her sexy yet doubtful savior. Can Ayla convince Theo that her ability is real? Or will his doubt stand between them?

Theo is such a love! It is a shame he never appeared in the previous books, just mentioned. I hope that changes in the future books and novellas. I adore Theo’s natural inclination to rescue a neglected dog from her abuser. Most people would have turned a blind eye to the dog’s plight, especially if it would interfere with their plans. What I love the most about Theo is how he bolstered Ayla’s start as an animal communicator. He may have doubted her ability, but that did not stop him from pitching her to a television celebrity. Theo knew it was the only way she could help her mentor gain notice for her ranch’s services.

I admire Ayla’s resolve to turn her life around. She no longer wants to be a pushover or people pleaser, especially her hoity toity family. I love Ayla’s stance on money. She may have grown up wealthy, but she does not behave snobbish like her parents and older sister. What I adore the most about Ayla is her decision to embrace her natural psychic ability to communicate with animals. She understands by doing so, she opens herself up to people’s skepticism and disdain. Ayla just wants to help animals-in-need, so she does not care what people think of her.

FAUX PAWS is book six in Roxanne St.Claire’s canine-themed, contemporary romance series, THE DOGMOTHERS, a spinoff from her popular THE DOGFATHER series. The story can be read alone; however, I do not recommend doing so. It is important to read the previous series and the prior books and novellas to understand the Kilcannon, Mahoney, and Santorini families’ dynamics and their affinity with dogs. I love how we get to see Declan and Evie’s twins, along with Summer and John’s wedding.

FAUX PAWS is a sweet and uplifting story of two people overcoming their heartbreak to find true love. I cannot wait to see who is next! I do hope it is Ella. I want her with Jace!