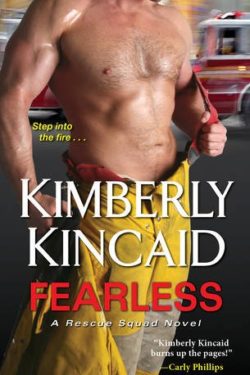 FEARLESS by Kimberly Kincaid is the second book in the Rescue Squad series. A great book about controversy in the work place.

Firefighter Cole Everett focuses his life on being the best he can be. Station Eight is a close knit group of men who have had each other’s backs for years. When Cole is asked to train a rookie firefighter, he jumps at the chance to prove he is capable and ready to move to the Fairview Rescue Squad. When the new “guy” turns out to be the first woman assigned to the station, Cole is a little unsure but he will do the best he can.

Savannah Nelson is a new firefighter fresh out of the academy. She is stubborn and is bound and determined to prove she can do the job just as well as any man. She knows she will have to be on her toes when a senior officer lets her know he is against her being at their station and wants to prove her incompetent.

Savannah and Cole try to just work together and not succumb to the sparks flying between them. Savannah has to prove herself on the job and Cole wants to advance to the Rescue Squad. Savannah is from a family of firefighters, with her being the only female. She left Texas to move to Virginia so she would have to prove herself without her family interfering. Trying to keep her feelings for Cole out of the workplace seems to be her biggest problem.

FEARLESS is a riveting story of the lives of firefighters and the daily risks they take. Adding in prejudice towards the opposite sex, breaking into their men’s club of sorts, makes for a compelling and heartfelt story. A book well worth the reading.