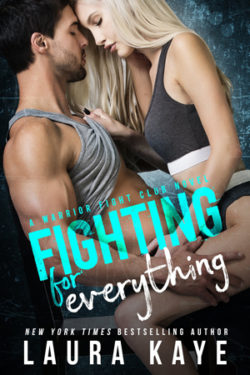 An unfortunate accident cuts Noah Cortez’s military career in the Marines short. He does not want his family nor Kristina, his childhood best friend, to know how damaged he is inside. Noah avoids Kristina because he believes she deserves better than some broken man. A fellow veteran introduces him to the Warrior Fight Club, and the club is everything Noah needs to overcome his weaknesses. Will Noah ruin his relationship with Kristina? Can the Warrior Fight Club give him the outlet he desperately needs?

Kristina Moore teaches language arts in middle school. Noah’s deliberate avoidance leaves her confused and hurt. Kristina acts on her intuition and tries to help Noah through his mental demons. When their relationship takes an unexpected turn, she must re-evaluate her feelings for him. Will the changes in their friendship complicate things further between them? Or will Kristina convince Noah she’s worth fighting for?

Laura Kaye has a knack for writing deliciously damaged heroes, especially ones who tug hard on the heartstrings. Noah is no exemption. His journey is fraught with self-loathing, palpable anger, and transition problems. I like how, despite his PTSD issues, he tries not to burden Kristina with them because of her childhood with a mentally ill father. His life may be spiraling out-of-control, yet Noah puts Kristina’s wellbeing and happiness first. I like that about his personality.

Kristina is such an awe-inspiring and selfless character. I adore her stubbornness and unflinching loyalty. No matter how many times Noah pushed her away or avoided her, Kristina never once abandoned him. I like how she understands that Noah needs to time to find the right outlet to help him adjust and heal. But, what I like the most about Kristina, is her unwavering faith that Noah can overcome his weaknesses and mental demons.

FIGHTING FOR EVERYTHING is the first book in Laura Kaye’s brand-new series, WARRIOR FIGHT CLUB. I love how the author really touches on some deeply sensitive issues our veterans often face. It really adds a poignancy to the storytelling.

FIGHTING FOR EVERYTHING is an emotive roller-coaster, friends-to-lovers tale. I literally could not put this book down. I am impatiently waiting for the next installment in this heartrending new series.