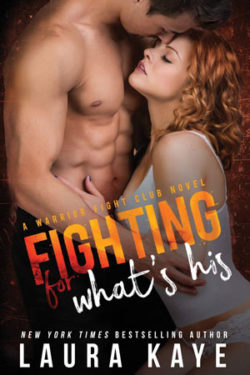 Former Army Ranger Billy Parrish works as a private detective. He is an active member of the Warrior Fight Club, a fight club that helps veterans cope with their physical and invisible scars. Billy dreads the arrival of his temporary roommate. He repeatedly tells himself Shayna is off limits, but the enthusiastic redhead burrows beneath his skin. Shayna’s influence makes Billy crave more for his life. Can Billy vanquish his mental demons? Or will they jeopardize his relationship with Shayna?

Shayna Curtis moves to Washington D.C. with hopes of a fresh start. She cannot wait to start her new job as a photographer for a local newspaper. Shayna’s older brother arranges for her to stay with his former Ranger buddy until she can find a place. She has always had a crush on Billy Parrish since her teenage days. Sparks ignite between them; however, Shayna fears her secret will destroy any possibility of a future between them. Can Shayna overcome her fear enough to confide to Billy? Or will other roadblocks stand in their way?

Billy Parrish is such a heartrending, tortured hero. He made me want to hug him continuously throughout the book. I like how Billy finds a kindred soul in Shayna. They both suffer from a form of survivor’s guilt that makes moving forward almost debilitating. She understands guilt’s effect on a person. But, what I adore about Billy is how Shayna’s presence finally gives him a reason to live. He can talk to her about his experiences and feelings that he normally keeps under wraps.

Shayna is such an infectious character. I love her spunk and creative swearing. Behind Shayna’s saucy enthusiasm is a woman haunted by her own mental demons and guilt. I like how photography becomes her outlet in dealing with her late brother’s death and her part in it. But, what I adore the most in Shayna is her ability to look past Billy’s ruined flesh and see the man buried within.

FIGHTING FOR WHAT’S HIS is book two in Laura Kaye’s latest series, WARRIOR FIGHT CLUB. The story can stand alone. There is no extensive plot that spills over from the first book. However, a lot about the Warrior Fight Club and its members are introduced in book one, FIGHTING FOR EVERYTHING.

FIGHTING FOR WHAT’S HIS is an emotional tale about two wounded souls conquering their survivor guilt to find love and acceptance. This story held me enraptured. I simply did not want it to end. I am eagerly anticipating Sean and Daniela’s book in November.