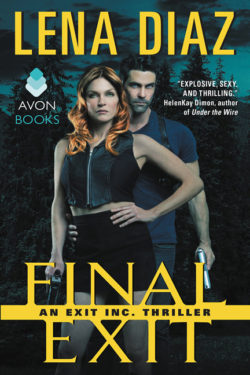 FINAL EXIT by Lena Diaz is book three in the EXIT INC. SERIES, and it was fast paced with lots of action. I kept turning the pages to see what would happen next. I didn’t feel lost even though I have not yet read the first two books in the series, EXIT STRATEGY and NO EXIT, respectively. I do plan to rectify that so I can fill in some of the blanks.

Kade, who is an FBI agent on a special assignment after he’s been injured, and Bailey, an assassin on the wrong side of the law (or is she?), shouldn’t have anything in common. They have empathy for each other’s situation after they grapple a few times, but there is a palpable chemistry between them that neither knows what to do about. When they are on the same page, they are so good together. But it’s a rare situation given their circumstances.

FINAL EXIT has grit, good guys and bad guys–although it was sometimes hard to tell who was who–and plenty of intrigue to go around. There were quite a few twists and turns to the story. The characters had some depth to them as well. EXIT INC., an organization made up of undercover vigilantes, is front and center in all three books and shows how evil some people can really be and the lengths they will go to in order to get the results they want. There was some closure along with a few loose ends that would have been nicely wrapped up in an epilogue.

Diaz is a new-to-me author.  I’ve already added the first two books in the series to my always growing TBR pile and plan to add some of her other books as well, especially if this is her caliber of writing.