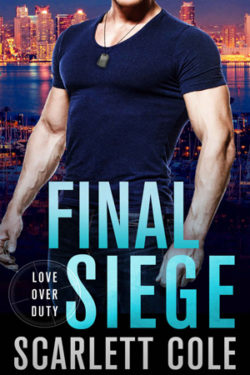 Delaney Shapiro is an investigative reporter researching a big story. In fact, this could be the story of her life. Working undercover, she’s risking everything to gather information and soon realizes national security is being compromised. Just when she thinks she’s getting close to the answers she’s seeking, she is kidnapped, thrown into a cave, beaten, and now being held hostage.

She doesn’t remember getting rescued. All she knows is that when she opens her eyes, she’s in a hospital, and the man looking down at her is the former love of her life. The man responsible for her brother’s death.

Mac MacCarrick has always loved Delaney. But because of their history, he knows she’s forever out of his reach. When he receives a call from a hospital in Germany stating she’s been seriously injured and asking for him, he drops everything to be by her side. As a former Navy SEAL, he lives by the code that no matter what, you always protect family. Even though he knows she blames him for her brother’s death, he will help her recover and figure out who’s responsible for injuring her and make them pay.

Delaney and Mac go on a journey that puts them both in danger. FINAL SIEGE is full of excitement, suspense, and danger. Delaney and Mac are two people who have suffered loss of loved ones in their lives. Delaney lost her brother and father, and her mother now lives her life inside a vodka bottle. Delaney’s brother was Mac’s best friend, and the circumstances of his death devastated him and filled him with guilt. However, her brother’s death is not what she thinks. Will Mac have the courage to finally tell her the full story?

This is book 2 in the Love Over Duty series and can be read as a stand-alone. It’s an action-packed sizzling romance. If you enjoy solving puzzles while riding on a roller coaster, this is the book for you.