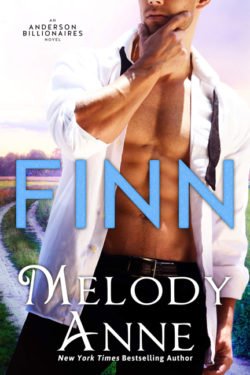 FINN is the first book in the ANDERSON BILLIONAIRES series. Since Finn has four younger brothers, all with successful careers, I know I’ll be reading each of their stories at some point in the future. The ANDERSON BILLIONAIRES are connected to other series the author has written that also have Anderson family members front and center: THE BILLIONAIRE BACHELORS and THE LOST ANDERSONS. Yet this title easily stands alone.

The prologue is a nice introduction and sets the stage for the story that begins three months later. Finn is ex-military. After being injured in Afghanistan, he’s now a civilian still trying to come to grips with leaving the service since it was his life for seventeen years. Then he and his brothers find out they have family they never knew about.

When they find out that they’re related to the very wealthy and eccentric Joseph Anderson, they don’t know what to think. But Joseph has a plan. He wants to build a veteran’s center  and wants Finn and his brothers to work together on it. When they agree to his plan, their lives are literally thrown upside-down, especially when Finn meets Brooke. It’s love at first sight, at least for him.

There are some unexpected surprises in the story as we get to know the characters, all of which have a depth to them. The brothers have a tight bond but can’t resist the teasing that goes with being siblings. At times there was a playfulness to the story, and at other times it was more serious.

Finn is smitten with Brooke. She’s also ex-military and a nurse practitioner who lays him flat in more ways than one. She and her older brother had a rough life due to their dysfunctional parents. They shared a special bond growing up, but since he died she feels alone. Finn and his siblings also had a rough upbringing. Finn has never planned to marry or have kids, but once he meets Brooke, he’s all-in, even if she’s running scared.

The romance is hot and steamy and very loving. The characters are deep, the plot solid, and the references to veterans and their issues is more than relevant today. There are also a lot of family members from various branches of the family tree woven into the plot,  which just adds another layer to the already-awesome story.

Melody Anne’s writing reminds me of authors Samantha Chase and Erin Nicholas. I look forward to reading many more of her books.