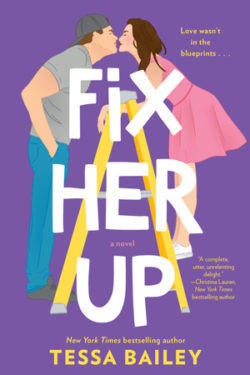 FIX HER UP is the first book in the HOT AND HAMMERED series, and I look forward to reading more. The cute and playful cover drew me in, and I kept wanting to see what would happen next. The story takes place on Long Island in New York, mainly in Port Jefferson, a place I’ve been to many times. The author’s descriptions were spot on, and I felt like I was transported there.

When Travis, a hometown hero who made it playing pro baseball, is injured and no longer a baseball player, he feels he’s lost his identity and proven his father’s belief that he’d end up back in his hometown and be just like the rest of them. While he wallows in his sorrow and grief, his best friend’s little sister, Georgie, is the only one who takes him on and makes him give up his pity party. She’s loved him since she was a teen, but she was always the annoying little kid that followed them around.

While it looks like he finally sees her, does he really, or is it all an act until he gets his next gig? They open up to each other. and she grounds him, giving him new perspectives on things that have happened now and in the past. He also opens up a whole new world for her since she’s never been girly, had a boyfriend, been kissed or done more. He’s been a chick magnet since high school, and it only got worse when he was in the pros. He doesn’t do relationships, just one-night stands. Will that finally change?

There were twists and turns to the story, and it had a nice flow. FIX HER UP had both heartwarming and heartbreaking moments, making for a rich read. There were a lot of steamy scenes as well, so take note.

Ms. Bailey is a fairly new to me author since I’ve only read three of her books, including this one.  I look forward to reading more of her books not just those in this series.