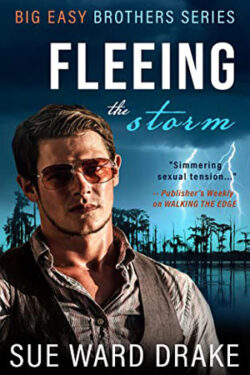 FLEEING THE STORM by Sue Ward Drake is the second book in the Big Easy Brothers series. This book can be read as a standalone novel.

An attempted kidnapping. An aunt forced to run with her niece…

And a bounty hunter who’ll do anything to save them both.

As a major hurricane threatens the Louisiana coast, undercover cop turned bounty hunter, Jack Guidry, has lost the fugitive he’s in pursuit of, but he is on the trail of pastry chef Grace Comstock, who’s the sister to the deceased girlfriend of the man he’s after. Grace is the only lead he has.

Grace is guardian to her toddler niece. Her sister suffered a horrible accident Grace believes was caused by her boyfriend. After being threatened by his bodyguards who insist she hand over the USB stick her sister had, Grace runs.

After an attempted kidnapping of the toddler, Jack sticks by Grace. He rescues her, and together they hunker down in her boss’s mansion to wait out the storm. Things heat up quickly, and soon Jack is questioning his feelings for Grace.

I like that the author brings in Jack’s family, including his elderly aunt. There is some comic relief in this fast-paced, full of action and suspense book. The romance goes from non-existent to hot and heavy.