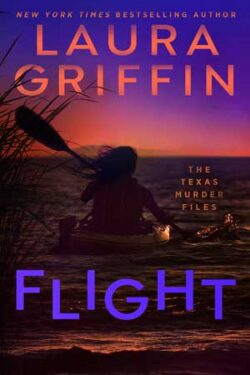 FLIGHT by Laura Griffin is an outstanding mystery mixed with the right amount of character development, romance, and an excellent plot that grips you and won’t let go.

When former forensic photographer Miranda Rhoads happens upon dead bodies in a canoe, her dream of letting go of the past starts to fade. Taking pictures of wildlife takes a backseat to helping solve a crime. Despite trying to steer clear of the investigation, her curiosity—and the engaging detective asking for help—pull her back in

The case seems daunting. Just trying to identify the victims is tough. But an odd clue leads Miranda to ask questions linking another murder in another town to the case. And as the information comes in, more murders turn up which don’t look connected on the surface but are related in a way no one could have guessed. And the police realize they don’t have a murderer on their hands, they have a serial killer.

Detective Joel Breda is the perfect hero determined to find answers. He’s smart, a protector, and dedicated to his job. He finds in Miranda someone who fills that void he hadn’t known existed. She’s smart and beautiful, and suddenly she’s in the cross-hairs of someone who wants her dead. As he, his team, and Miranda try to figure out who is behind the murders, the plot twists and more suspects line up.

The story is fascinating, the setting beautiful yet creepy, and the characters real enough that their motivations always feel true and consistent. FLIGHT is the second book in the Texas Murder Files series but totally stands on its own. Now I want to go back and read the first book, HIDDEN.

Laura Griffin in a master at suspenseful storytelling. Her books never disappoint, and FLIGHT only adds to her stack of amazing reads. Check out FLIGHT for a mystery that keeps you guessing and a villain you won’t be able to guess until you see him/her/them (no spoilers here!) in action the last few pages.