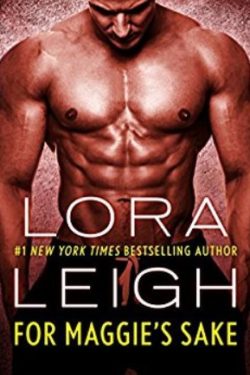 Maggie Chazez’s life has become a nightmare. Grant, her deceased husband’s, journals make it appear that she was aware of his crocked dealings so she’s now on the radar of the law abiding police as well as a drug lord interested in getting to her before she can rat out everything she knows. Unfortunately for everyone concerned, Maggie doesn’t know anything and that makes her position extremely dangerous.  Joe, whom Maggie was once very much in love with, has agreed to take her into protective custody until they can ensure her safety and make sure she doesn’t have the information they’re looking for.  What Joe doesn’t anticipate and isn’t fully sure how to handle is the intense attraction that still burns between them.

Lora Leigh’s FOR MAGGIE’S SAKE is a captivating read from beginning to end. Maggie’s innocence or guilt is irrelevant in the face of everything going on around her and being put into protective custody with the one man she’s never gotten over is just one more situation she has to deal with.  Joe has good reason to be angry with Maggie but underneath his anger is an undercurrent of love for her as well as sadness for his best friend Grant’s betrayal.  While the storyline is great and I loved getting to know the characters somehow the erotic scenes just aren’t as intense or sweat inducing as I remember them being in earlier works (like the BREEDS series).

FOR MAGGIE’S SAKE was originally published in the anthologies REAL MEN DO IT BETTER and TAKEN.