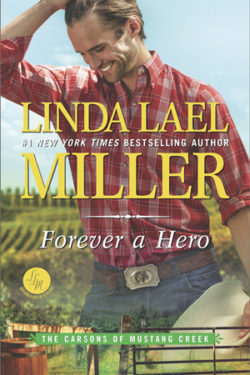 FOREVER A HERO by Linda Lael Miller is book 3 of the Carsons of Mustang Creek series and it is delightful.

Mace Carson is a humble man, but to Kelly Wright, he is a hero. Years ago, he rescued her during an assault on their college campus. He testified against the man who grabbed her, and the criminal ended up going to prison for his crime. She lost touch with the man who saved her, but she has never forgotten him.

The company she now works for wants to form a partnership with Mountain Winery, owned by Mace. She has been sent to hopefully negotiate a deal with him on their behalf. Kelly has not seen him in years and is very anxious about getting back in touch with him.

Mace has no interest in partnering his wine business with any company. He thinks things are perfect just the way they are. However, he is very interested in hearing Kelly’s sales pitch. He hasn’t forgotten the young girl he helped out and is intrigued and more than a little bit attracted to the stunning woman she has become. What can it hurt to pretend to consider her offer? Maybe it could result in her staying around a bit longer. Maybe she will fall in love with his family and the small town he adores. Maybe she will acknowledge how amazing their connection is and want to stick around to see where it takes them.

Things seem to be going well, but then things start to happen. Dangerous things. They learn the man who assaulted Kelly has been released from prison.  He vowed he would make Mace pay for having him put behind bars. What better way to ruin Mace’s life than to take away what he loves the most…Kelly. Will the criminal make good on his threats? Read the book to find out.

Linda Lael Miller is a wonderful writer and FOREVER A HERO does not disappoint her fans. She balances humor, romance, and danger in a way that makes you not want to put the book down until you reach the ending. At least, that is what happened to me. This is a great read.