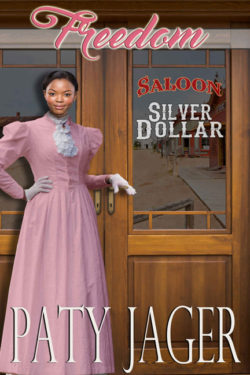 FREEDOM is the third book in the SILVER DOLLAR SALOON series that is set in the 1880’s in Shady Gulch in the Dakota Territory. I loved that we are back with characters I’ve not only grown to love but that the story picks up where we left off. This is Freedom’s story, a freed black woman living in the late 1800s.

The story takes place in Shady Gulch, the town of Milestown, and the Crow Reservation where Water Runs Fast (called Swift by Freedom) lives with his family. Swift is of the Absarokee Raven People, who are called Crow by the whites. He is totally different from Ben, a man Freedom thinks she loves, and so caring. He always looks out for Freedom and puts her first. It was nice to see how he and his people were portrayed and how Freedom honored them when she met them.

This story is emotional due to the violence, prejudice, and heartbreak portrayed. Yet it’s also filled with hope and love thanks to Freedom’s friends and Swift’s family. The inclusion of Swift’s native tongue was an unexpected bonus and added a richness to the story. Ms. Jager is terrific at portraying realistic characters in a historical western setting.There is wonderful closure thanks to the epilogue, which had a few surprises. I can’t wait to see whose story will be next.

Ms. Jager has become a favorite author of historical fiction.  I always look forward to reading whatever she pens, whether part of a series or an anthology.