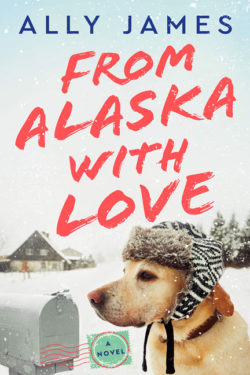 FROM ALASKA WITH LOVE drew me in from the very first page. This is a wonderful love story, which started off on a terrific note. Sara hears a radio ad asking for listeners to send a card to deployed troops to help their morale while overseas and on a whim sends one. Her card ends up in the hands of Major Gabriel Landon, who is stationed in Iraq. He’s already served for sixteen years and doesn’t show much feeling. But that’s all about to change when he reads Sara’s quirky note.

They become fast pen-pals and look for each others emails. The emails progress to messaging and soon FaceTime. They develop a rapport that helps both of them. Sara is the live-in nanny for her five-year-old niece in North Carolina and lives with her brother and sister-in-law. Their mom lives nearby, and Sara and her brother care for her as well since their dad died five years before.

Sara’s definitely unappreciated except by her niece, but Sara doesn’t realize how much her life is lacking until she attends a family reunion and finds out what her relatives really think of her. Her only ally becomes her cousin, with whom she hasn’t had much of a relationship, but they soon become fast friends.

Most of the story is set in North Carolina and Iraq, but when Gabe returns to his home in Alaska on leave, it segues there. The author really makes you feel the Alaskan cold. The addition of Gabe’s dog, who is endearing and seems to judge people correctly, really makes the story shine.

Gabe and Sara don’t have an easy relationship, especially when he’s out on leave and he’s about to give up on their pseudo relationship and get on with his life. I loved the path that the story took and how feelings were revealed. Gabe stepped out of his comfort zone more than once, and it was so worth it. There are surprises throughout and a sweet epilogue. I hope there will be more stories since Sara’s cousin definitely needs her story told (hint, hint).

This is the first book by Ally James, who also writes under the name of Sydney Landon.  Both are new-to-me authors. I look forward to reading more of her books.