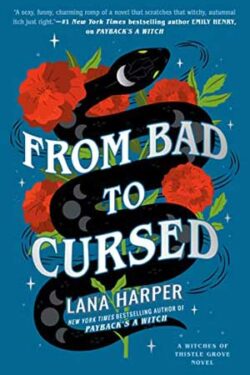 In the town of Thistle Grove, there live four witch families, each with their own brand of magic. Not surprisingly, over many years, grudges have developed between the families. When a terrible spell curses a young woman, one of her cousins is assigned to work with a woman from the family whose magic appalls them. Can these two solve the mystery, or will their growing attraction for each other doom them to failure? And can these two star-crossed lovers overcome their families’ enmity?

Rowan Thorn’s family does “green magic,” which nourishes the earth’s plant life. Isadora (Issa) Aramov’s family does demon-summoning, conjuring up the dead and evil beings best left out of our realm of existence. When Rowan’s cousin is hit with a terrifying curse that robs her of her magic (during a public ceremony,) the logical culprits are those from the family of necromancers–the Aramovs. Issa’s mother asks her to work closely with Rowan to figure out who cast the spell and why. But Issa and Rowan had words years ago, and neither is happy about their new partner. Can they put aside their loathing for each other long enough to find the spell caster? And when they begin to feel attracted to each other, will they still be able to work together?

The beginning of the story was a bit slow, as with all books that tell stories set in an alternate world. Once the parameters of their town are established, the story takes off. This is an interesting take on the Romeo and Juliet story-line, though there is magic involved with why the two families detest each other. One is considered good magic, while the other does black magic. But after all, it’s all magic, right? And good and bad are judgements that don’t matter when the heart is involved.