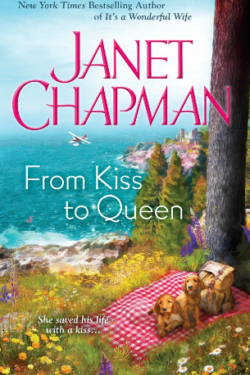 Jane Abbot is a simple woman with few friends, a primarily solitary lifestyle and serious survival skills which is why she is present when a small plane crashes into a local pond. Instinct kicked in and she dove in to the frigid water to save the pilot, gifting him with a lifesaving kiss (allowing him oxygen until he could surface).  Because of her bravery Mark dubs her his ‘guardian angel,’ especially since she thinks nothing of tackling every dangerous situation thrown her way – all to save a stranger she assumes could be anything from a drug runner to an international spy.   She’ll soon discover that Mark is no simple man, in fact he’s just as stubborn and bossy as she is and they’re going to clash because Mark has no intention of leaving his ‘angel’ behind when he returns to his homeland – and she has no clue that her life is about to change in ways she never dared to dream.

Mark is really Prince Markov Lakeland, and he’s soon to be crowned king of his small country, Shelkova. He has a military at his beck and call, but his life was saved by one pint sized woman whom he fully intends to never let go – even if she fights him every step of the way.  Mark’s ready, willing and able to provide Jane with everything she’s ever wanted – a family of her very own.  Jane’s an orphan who suffered a crushing injury to her leg as a baby so getting her to believe she can have her fairy tale ending is going to be difficult and will require the aid of Mark’s whole family.

Can I just say that I really love Janet Chapman’s FROM KISS TO QUEEN? The characters are larger than life, flaws and all, with king size egos, stubborn attitudes, and protective instincts that just made me happy.  The idea of a prince hunting for a bride, crash landing and having all sorts of military air and watch crafts at his disposal is stretching it, but its fiction so I simply enjoyed the ride and didn’t fixate on if it could really happen or not.  I adored Jane simply because she’s ‘real’ – she fights for what she believes in, doesn’t treat Mark any differently once she learns of his royal lineage,  and is insecure about her own worth (like so many women).   Of course, Mark is sexy, daring, and smart enough to at least attempt to understand Jane’s needs and accommodate her whenever possible.  We all need a man like that – unfortunately Mark’s taken, but he has brothers – I call dibs on Alexi.

With FROM KISS TO QUEEN Ms. Chapman allowed herself the freedom to intertwine a stand-alone romance with all her books, but especially her more magical series, SPELLBOUND FALLS, which is where two of the characters from this read will be connecting (and I can’t wait to witness the fireworks) in her next book CALL IT MAGIC . I have to confess that I haven’t read any of the SPELLBOUND FALLS series yet, even though I’ve read many of Ms. Chapman’s books so will definitely pick up some of those books and delve into this obviously charming community (just look at the covers on the books, beautifully done cover artist!)

FROM KISS TO QUEEN is an action packed, fun, emotionally charged romance that I did not want to end. It’s definitely a Recommended Read!