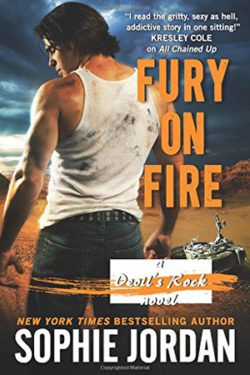 In FURY ON FIRE by Sophie Jordan, North Callaghan has had a hard life. He spent time in prison and is now on parole. He now lives his life by his own rules. He works hard, drinks even harder, and loves sex. North isn’t too picky in the sex department as long as the woman is ready, willing, able, and knows the score. No way will he ever settle down. After the things he has done, he doesn’t believe he is capable nor does he deserve the white picket fence and all that goes with it.

Faith has just bought her first home and is excited about moving in. The first order of business is to meet the neighbor she shares a wall with. She bakes him scones as a hello, but imagine her surprise when she exits her house and steps on the plate holding the scones on her doorstep. No word of explanation. What a jerk.

Faith knows she should stay away from her rude neighbor, but he’s gorgeous. Hearing him having wild sex with other women through the wall of her bedroom only amps her up more. Even knowing he’s a convicted felon doesn’t make her want to keep her distance. She is intrigued by him. She knows her brother and father, both law enforcement officials, would go ballistic if they knew of her interest in an ex-con, but what’s a girl to do?

FURY ON FIRE is the third book in the Devil’s Rock series. North is first introduced in the first installment, when he and his brother are sent to prison. I was glad to read his story. However, the slow interaction between his character and Faith made for a rushed ending. I feel they didn’t get to know each other and didn’t spend enough time together until close to the end of the book.

I liked the story but hope next time Ms. Jordan sets a better pace on developing and enhancing the romance between the main characters