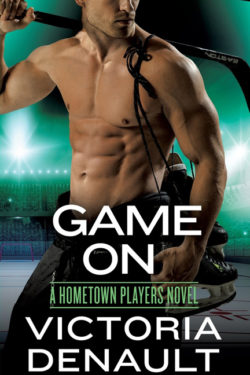 GAME ON by new-to-me author Victoria Denault is not your typical sports romance. Both the professional game of hockey and the Canadian system of foster care share equal billing in this meaningful read. The two main characters have a lot in common, which they each discover as the learn to trust each other. At times this story is heartbreaking, while other parts made me smile from ear to ear.

When Brie Bennett was four years old, she was adopted by a very wealthy and loving couple. She was lucky and spent only a short time in Quebec’s foster care system. However, she did witness more than one atrocity while she was there. With the help of her wonderful parents, she is now the director of a foundation that helps older kids stay off the streets and out of foster care. Brie is loaded with goodwill and kindness, so she works tirelessly and endlessly for the foundation’s survival. She would love to settle down and find her forever love.

When Alex Larue was five, his parents died in a car accident. From that point forward his life was spent in various foster homes, which were all bad news. Hockey was his only salvation, so he immersed himself in all the free hockey programs that Quebec had to offer. Luckily he was talented, and a junior league coach put him on the path to success. He has some very good friends and does not believe in commitment or love. Even though the tabloids have a field day with his dating practices, he is a very private person. Alex is forever donating his time and money to worthy causes, and that’s how he and Brie meet.

GAME ON is filled with raw emotions and discoveries from both main characters. Brie and Alex are intelligent and real, and the author intertwines their pasts quite cleverly. Their romantic chemistry is off the charts, which evolves into much more than either of them anticipated. This is the sixth novel from the HOMETOWN PLAYERS BOOK series and it can be enjoyed as a standalone.