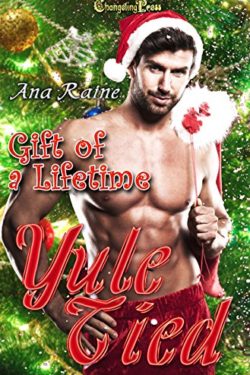 Ryo normally enjoys his job at the Crooked Paintbrush – encouraging others artistic endeavors, meeting other people, and earning a paycheck for doing so.   However, when one wanna-be artist becomes disgruntled because he’s not the next Picasso, and Ryo’s teaching can’t transform him into one, it becomes clear that it’s going to be a sad and lonely holiday season for him.   What Ryo doesn’t realize is the one student he’s had his eye on throughout the class has been watching him as well.  Logan noticed Ryo’s altercation with the disgruntled student and after class offered to help clean up the mess the other man left behind.  Of course, he really just wanted to get to know Ryo so he’s excited when Ryo agrees to go to dinner with him.  As luck would have it, Ryo and Logan complement each other beautifully.  Ryo’s a submissive and Logan’s Dominant.  It’s going to be a naughty/nice Christmas for these new found lovers.

Ana Raine captured my attention with this quick read. Ryo’s altercation with the disgruntled artist made me laugh since I could easily envision the man’s bluster – and loved Ryo’s calm reaction.  This is a novella so the story progresses quickly and Ryo and Logan become lovers very quickly but there’s no denying the men are extremely compatible and share a sexual kink.  Like the other titles in the YULE TIED series, GIFT OF A LIFETIME is a fun Christmas themed read with a healthy serving of romance, lust, and outright naughty sex.  Face it sometimes being put on the naughty list is totally worth it.