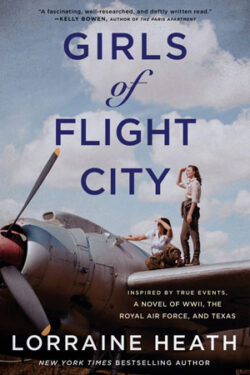 GIRLS OF FLIGHT CITY by Lorraine Heath is about a flight school in Texas that trained British flyers and is inspired by true events.

Jessie Lovelace yearns for a career in aviation. When the civilian flight school in her small Texas town begins to train British pilots for the RAF, she fights to become an instructor and becomes one of the best. She also falls in love with a British officer who runs the flight school and is heartbroken when he returns to Europe to fight against the Nazis.

Rhonda Monroe gives up her job as a hair stylist to give the cadets a wild ride in a flight simulator. Fearing little, she dares to jeopardize everything for a forbidden relationship with a charismatic airman.

Innocent and fun-loving Kitty Lovelace, Jessie’s younger sister, adores dancing with these charming newcomers and falls in love only to have her heart broken.

As the war intensifies and America becomes involved, the Girls of Flight City do their part to bring a victorious end to the conflict. Three beautiful love stories, some very sad parts, but a joyful happily ever after.