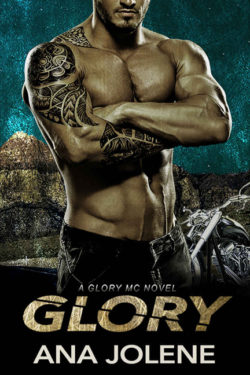 Imagine a world where solar flares have scorched much of the earth. In Ana Jolene’s GLORY, many people have died. The government has collapsed. Those who are alive struggle to get food and a place to live that will protect them from the damaging solar rays that still hit the earth. You can’t worry about the future. You don’t know if there will even be a tomorrow. You just want to get through each day.

There are no cities. They have been broken down into areas called wards. The Glory Motorcycle Club (MC) runs Ward 5. Their job is to protect the people within their jurisdiction. It is a violent world, but they do their best to keep people safe and are swift to dispense justice when their rules are broken.

Indie is desperate for a job. She applies and gets a job at the local bar that is home to the Glory MC. She is scared of them, but in this day and age, you can’t choose where you want to work when you are fighting to survive. While at work, she catches the eye of Hastie, the son of the Glory MC President. He’s amazing, but she has a secret she’s afraid to share with anyone.

This is the romance between Hastie and Indie. With GLORY, Ana Jolene has created an interesting world that is harsh but has its moments of wonder. Her characters are complex and draw you in. I appreciated her portrayal of Indie, a young woman with bi-polar disorder. The mania and depression this young woman deals with is something many of us have seen or dealt with personally. How Indie is perceived and treated by this harsh MC is inspiring.

A good read with action, violence, compassion, and love.