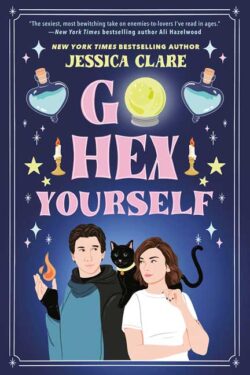 GO HEX YOURSELF is the first book in THE HEX series. I look forward to reading more in this series to at least see what happens next to the characters. The story was a little far-fetched for me with witches, warlocks, and familiars existing side by side with those not of the same realm. Be prepared to read about a lot of magic, curses, and spells along with very hot and steamy moments.

Reggie applies for a job thinking it has to do with a card game she likes to play involving magic. Little does she know what she’s getting herself into when the magic is real and she starts to believe in it. Ben is the boss’s nephew and works out of his aunt’s house quite often, so their paths are always crossing.

The characters have depth to them. The plot is interesting and well-paced, yet some story-lines involving other characters seem to languish and not go anywhere. There is some closure, but the story ended too abruptly for me. I would give the next book in the series a read to see if it is more to my liking. I do particularly love the colorful cover, which drew me in.

Ms. Clare is an author whose books I’ve enjoyed with billionaires or cowboys in the starring roles. I look forward to reading more of her work.