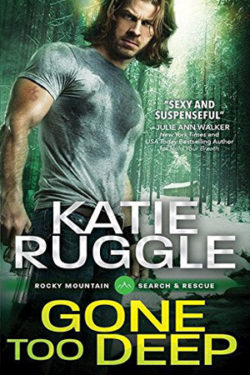 I. Loved. This. Book!  The third novel in the Rocky Mountain Search and Rescue series, GONE TOO DEEP can easily stand on its own. The mystery from the first book continues to play through this third novel, and the tension builds. This book is so far my favorite, mostly because I fell in love with the characters, and in particular, the hero, so hard!

In GONE TOO DEEP, Ellie Price gets a message from her mentally ill father,and unable to turn him away, despite many instances of trying to help the man, she goes in search of him in the cold, unforgiving Colorado mountains. While looking for information, she nearly slips on the ice and is stopped from falling by huge, quiet, George Holloway.

George has lived on his own for years. He doesn’t own a television and spends all his free time locked in his own world and building things. But he’s the best tracker and survival expert the Search and Rescue team has, so he’s the perfect man to help Ellie find her father.

What they find as they trek through the bitter cold are armed bad guys with an agenda all their own. Then there’s Ellie’s father, Baxter, who has secrets he’s hiding. And another Search and Rescue team member who doesn’t seem to have Ellie’s best intentions in mind.

The pacing is swift, the action fierce, and the romance a slow burn as the hero and heroine fight off hypothermia, drug dealers, and their differences while falling deeper for each other. The tension really worked, especially because Ellie and George deal with outside issues, and their romance unfolds realistically as they handle surviving first, loving second.

And I have to say, George might be one of my all-time favorite character. He’s powerful, big, and shy. A quiet man who doesn’t have much experience with women at all, but he feels strongly for Ellie. While his words may be sparse, his feeling are not, and as he grows to care for her, watching him mature into a full-fledged leading man was enchanting.

GONE TOO DEEP has it all–thrilling suspense, a heart-warming romance, and action-packed scenes that will leave you on the edge of your seat waiting to see what happens next. And the ending… Ruggle gives a twist I hadn’t seen coming. And I sincerely hope it doesn’t mean what I think it means. Just thinking about it makes me crazed, because I need to know more! I cannot wait to read book four, IN SAFE HANDS, which releases in October.