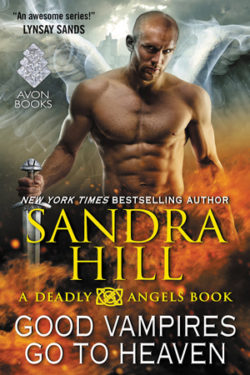 Witches, vampires, and vangels, oh my! In Sandra Hill’s new book, GOOD VAMPIRES GO TO HEAVEN, Zeb, a smokin’ vampire demon, is rescued from prison hell by a red-hot mama, Regina, a multi-talented vangel witch. She brings with her three zany cohorts in crime in this last novel in the DEADLY ANGEL series.

Zebulan, a two thousand year old demon, is a terrible vampire demon with a double cause. Originally, his job is to turn mortals into vampire demons as they enter the pits of hell, into creatures like him, so they can fight the vampire angels. Secretly, he bats for the other side. He is hoping to join St. Michael the Archangel some day. A war of epic proportions keeps Zeb and Regina just a tad busy, more like a lot, after he leaves prison. However, amidst all the fighting, scorching sparks fly between Zeb and Regina. Surprisingly, they find the time to stoke the flames of their fiery attraction. Are Regina and Zeb a dubious match made in heaven? Will Zeb ever earn his spot among the vangels?

GOOD VAMPIRES GO TO HEAVEN is a fabulous finale to an extremely entertaining series. It is a mixture of all things good and evil. Non-stop action, steamy romance, bloodthirsty battles, and hilarious situations round out the plot. Sandra Hill pulls out all the stops in this last entry containing all her beloved characters from the DEADLY ANGEL series. Ms. Hill deftly delved into each character, bringing them to life, touching them with humanity. Definitely touched my heart! I honestly think this is the best of the best. If you like vampires, demons, and angels with a sassy, edgy style, this is the book for you! GOOD VAMPIRES GO TO HEAVEN is killer!