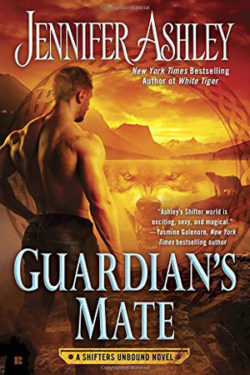 In GUARDIAN’S MATE, the ninth book in Jennifer Ashley’s amazing Shifters Unbound series, a female is chosen as Guardian–the one Shifter who can send the spirits of dead Shifters to the afterlife–for the first time in…forever. The Shifters don’t know what to do about it. Neither does wolf Shifter Rae Lyall. She didn’t ask to be chosen, and she has no idea how to wield the power of the Goddess.

Her father has called in a few favors and gotten Zander Moncrieff, a “crazy” polar Shifter and healer, to help Rae. The thought is that since Zander is “goddess touched” he’ll be able to help Rae deal with the magic inside her. Except nothing but trouble follows this pairing.

Zander isn’t keen on helping her. Rae isn’t sure she even likes the polar. And then there’s that unexplained chemistry between them. Might they be…mates?

Following through on their new undefined relationship suddenly takes a backseat to a whole mess of trouble. They’re joined by a grieving wolf Shifter, kidnapped by hunters, involved in a hunt for rogues, and forced to fix a broken sword, all while Rae has to learn how to become the Guardian the Shifters need her to be.

As usual, Jennifer Ashley manages to merge humor, adventure, steamy love scenes and a fast-moving plot into a well-crafted story. Rae and Zander fit, both needing something the other can give them–acceptance and love. They’re different from the norm, and that suits them both just fine.

The pacing was so fast it took me a little bit to accept that the romance didn’t just blossom but explode between the two. Still, the warmth and intriguing plot kept me glued to the pages. Another surefire hit for Ashley with a series that just keeps getting better.

Though the book can be read as a standalone, it’s much better experienced as part of the series (i.e. Zander seemed so much more well-rounded to me, having read about him in previous books.) That said, one could still easily pick up this book and read it by itself with all enjoyment. GUARDIAN’S MATE is a wonderful read to add to any paranormal romance fan’s collection.