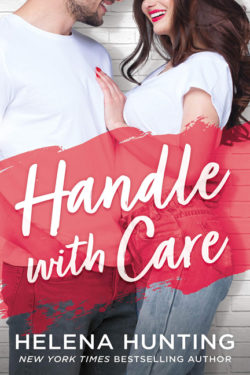 This is only the second book I’ve ready by Ms. Hunting, but I’ll be back for more.  HANDLE WITH CARE is the fifth book in the SHACKING UP series, and it didn’t disappoint. The story flowed smoothly with a lot of character interaction, and each character had depth and interest. I kept reading one more chapter because I wanted to see what would happen next.

Lincoln returns from Guatemala, where his own business is currently working on a project, to attend his father’s funeral and is made acting CEO of their family business in New York City. Lincoln agrees when his grandmother asks him to stay for six months until she can find a replacement for his father. He’s given a handler to make sure he dresses and acts properly, as well as to manage his day-to-day schedule. He and Wren, his handler (or babysitter as he often calls her) don’t hit it off immediately, but he grows to depend on her and likes that she doesn’t take any nonsense.

Lincoln and Wren have chemistry. They start to rely on each other and pair well together. Lincoln’s grandmother is a no-nonsense woman. I love how she’s strong and doesn’t take any guff.  His mother and brother are not nice people and always see the worst in others.

The story has secrets and an interesting plot. Lincoln approaches not only his business life but his personal life and family drama with maturity. He has a nice relationship with his cousin, whose penthouse he’s borrowing, and they are more like brothers. The secondary characters really make the story, none are superfluous. The chapter titles are a nice hint of what’s to come in each chapter and from whose perspective—Lincoln’s or Wren’s. The epilogue that takes place eight months later ties up most of the loose ends and gives better closure especially in regard to the happily ever after.

I have more books in this series to read, only having read the third book in the series, I FLIPPING LOVE YOU. HANDLE WITH CARE is a terrific read I highly recommend.