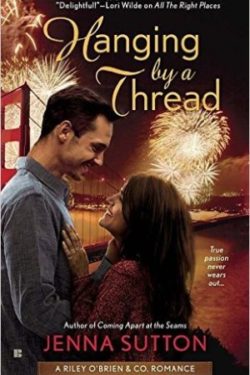 HANGING BY A THREAD by Jenna Sutton is the third book in the RILEY O’BRIEN & CO. series.

When Cal overhears Bebe telling his sister Teagan about being a virgin and finding someone to help her lose her virginity, he decides he will be the one. Cal has had feelings for Bebe for years but she doesn’t ever want to be friendly with him.

Bebe was sent to the states by her parents when she was fifteen to attend college. She had a pre-arranged marriage set up with a man from India whose family is very influential. Bebe’s parents have never wanted to be close to her because she is a disappointment since she didn’t become a doctor like her parents and brothers.

Bebe has found her place in the states and refuses to go back to India and marry her fiancé. As she gets close to Cal, she realizes she wants to be with him forever. She needs to tell Cal about her fiancé but events keep that from happening. When he finds out by accident, it devastates him. Can Cal and Bebe find their way back to each other?

This story illustrates a country’s traditions and a young woman who defies her responsibilities to be what and who she wants to be. HANGING BY A THREAD is an interesting interpretation of the privileged lifestyle of others. I loved how the author was able to show the complexities of an arranged marriage in the modern world.