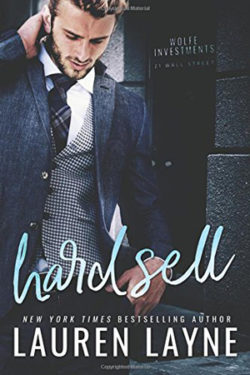 HARD SELL is book two in the 21 WALL STREET series and a nice continuation (though this can be read as a stand-alone romance) as we are reunited with not only Matt and Sabrina, but also Ian, Kennedy, Lara, and Kate. We learn more about Matt and Sabrina and see how good they are together, even if they are only friends with benefits and/or frenemies.

The characters have a depth to them, keeping their personal life and family history well hidden from each other and others too. The story is told by either Matt or Sabrina a chapter at a time, which was sometimes confusing since I’d have to look back to see who was telling it in the first person.

It was nice to catch up on the 21 Wall Street gang’s lives. Matt and Sabrina are a fake couple at first, but they develop into something more in a really fun way. I’ve never seen two people so anti-relationship—not just anti-marriage and anti-love—be there for each other! There are a lot of twists to the story, some expected and some not. There’s the requisite happily-ever-after that I wasn’t sure would materialize and some closure due to the epilogue, which takes place three months after the story.

Ms. Layne is a fairly new-to-me author, having only read the first two books in this series plus two books and a novella in THE WEDDING BELLES series. I look forward to reading more of her books, especially Kennedy’s story.