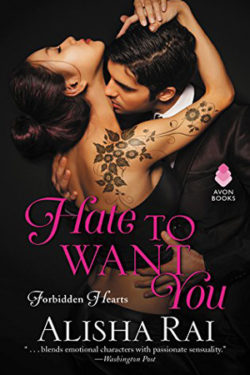 Ten years ago, a terrible tragedy tore apart two families who co-owned a successful grocery store chain. One side lost a father and the other side a mother. Questions were left unanswered regarding why they were together in the car that lost control. In the ensuing days, the Chandler widower bought the Kane share of the business from the grieving widow for far less than market value.

Golden couple, Olivia Kane and Nicholas Chandler, had been in love, but their relationship was a casualty of the ensuing pain and fallout from the entire situation. Livvy left town not long after the break-up, but every year, on her birthday, texted her coordinates to Nicholas. The rules? One night. No one was to know. And year after year, Nicholas would travel to whatever location in the US he was given for that illicit rendezvous. On the tenth year, her birthday passed and there was no message.

HATE TO WANT YOU begins with our heroine having returned home, after a decade, to help care for her recuperating mother. Our hero knows he should stay away from her, but knowledge and practice are two very different things.

The heroine is of Japanese and Hawaiian descent and has the unconventional career of a tattoo artist. She is brash with a façade of confidence overlaying inner turmoil and vulnerability. Livvy is a likable heroine and unlike any I have come across within memory. Her ethnicity is not raised like a banner and then put away, nor is it scrutinized frivolously but is part of the broad strokes fleshing out her identity. The author also gives an authentic feel to her heroine’s affliction of depression. For all of that, Livvy never comes across as weak.

Nicholas took his place in running the business and keeping the peace amongst his family. He is responsible with a capital “R.” One doesn’t have to read many pages to understand what a tight rein he has placed on himself and his emotions. As his interactions with Livvy multiply, the strain of keeping his emotions bottled increases. It is so beautiful to watch him lose that battle.

Happily, secondary characters/siblings of this romantic couple each find their own stories in second installment, WRONG TO NEED YOU, and the soon-to-be released third story, HURTS TO LOVE YOU. I can’t wait to see where the author leads me!