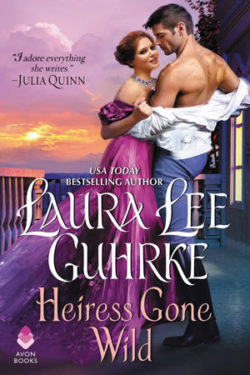 HEIRESS GONE WILD, by Laura Lee Guhrke, is the fourth novel in “The Lady Truelove Series”.

Wealthy silver baron, Jonathan Deverill, makes a promise to his terminally ill partner, to be guardian to his little girl who has been staying at a finishing school back east for the last ten years.

Jonathan, originally from England, has been living in America for the past ten years due to a rift with his father. His father is now dead and Jonathan’s two sisters are running the family newspapers. He decides to meet his ward, then go to England to visit his sisters, and on to check on foreign investments.

When Jonathan arrives at the White Plains, NY, finishing school to meet the little girl he’s pictured in pigtails and pinafore, he is shocked to find a beautiful young woman with an attitude. Marjorie does not want to be left behind at the school where she has been teaching for two years. She is ready to live her life. Several of her school friends have gone to England, had a season and married aristocracy. Marjorie intends to do the same.

She shows no emotion for the death of her father. When her mother died she was ten years old and her father dropped her at school. He sent letters to her and money to the school, but never came to see her in ten years.

Marjorie’s father also started a bank account for her and she will be extremely wealthy when she comes of age in a few months.

Jonathan boards the ship for London only to find Marjorie has stowed away in his cabin. He finds a suitable roommate for her down the hall.

They share their first kiss on board the ship. The attraction between them is sweet and comical, as Jonathan tries his best to stay away from his ward romantically. The attentions of other men to Marjorie has Jonathan fighting feelings of jealousy.

Jonathan’s sisters in England have married well to a Duke and a Viscount. The sisters provide the guidance emotionally and socially that Marjorie needs for her season. They become the family Marjorie never had. The sisters conspire to get Jonathan and Marjorie together.

There are lots of stolen, steamy, sexy kisses. In the end they get their happily ever after, but only after they both compromise on what they want out of life. Is she willing to give up marrying a Duke? Is he willing to settle down and not travel out of the country?