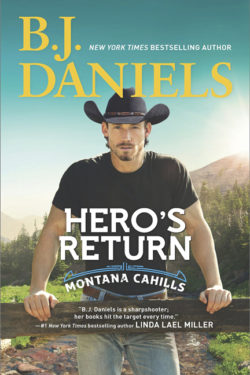 HERO’S RETURN is a nice continuation of THE MONTANA CAHILLS SERIES. The book started off great with the prologue and sucked me right in. I caught up with the Cahills we’ve met before, along with some of the other characters, and it was like I never left Gilt Edge, Montana! The story picked up right where we left off previously, and there are definitely more stories to tell. I was caught up in the action from the first page to the last.

Tucker is the Cahill brother who has been missing for nineteen years. He left with a lot of guilt after a love gone bad just out of high school and never looked back. His family had no idea where he’d gone, and they don’t get many answers upon his return. He’s easy to love, and you can feel the hurt and anger radiating off of him at times since the girl who hurt him, Madeline, is still trying to connect–or is she?–and he doesn’t know who to trust anymore.

When Tucker meets Kate, who has a bone to pick with him over the past, namely his love for Madeline all those years ago (especially given what Kate knows about her,) things go from strange to worse. There’s a lot of mystery surrounding the woman and her family, and Kate and Tucker are set on finding out the truth. There are twists and turns to the story, some expected and others not. There is a depth to Tucker that doesn’t get fully realized, but his old friends are pretty shallow.

Kate and Tucker have chemistry but don’t know if it’s real or just because of the circumstances they’re in, trying to solve the mystery together. They definitely come from different worlds, but will that stop them? There is a fragility about Kate that she doesn’t show very often, given her family background and that she’s an investigative reporter.

The story flowed nicely, albeit slowly at times. There was nice closure and a happily-ever-after that was sweetly conveyed and better than I imagined. There were enough loose ends to give us hints of what’s to come in future books in the series.

B.J. Daniels is an author whom I’ve recently found and have added a few of her books to my always growing TBR pile. I can’t wait to be back for more western, hot cowboy, small town romances not only in this series.