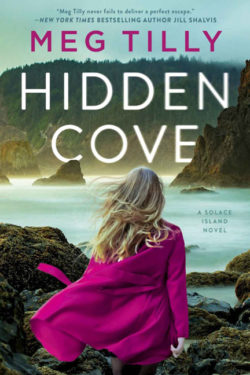 HIDDEN COVE by Meg Tilly is the third book in her SOLACE ISLAND SERIES. I did not read her first two books so I can say this is a standalone book.

Zelia Thompson is a successful gallery owner on Solace Island. She is in her late 30’s, has an eye on her biological clock, and curvy (I got the impression from the book she is overweight too.) Her business is a success and she has contacts for art purchases all over the world. A friend from New York sends Zelia a painting that is dark and disturbing. Zelia hangs it in an out of the way spot, not wanting to look at it every day.

The friend ends up dying from an overdose. Zelia cannot believe this as her friend never did drugs.

Gabe Conaghan is a successful thriller author who is staying on Solace Island checking on a resort that his father has bought. Gabe and Zelia meet in a coffee shop. They are attracted to each other. She eventually tells Gabe her suspicion that her friend has been murdered. He agrees to help her investigate as he has a lot of contacts in N.Y. whom he consults with on his thriller books.

Their friendship is sweet, and as they work together to solve not only the death of her friend but the whereabouts of a missing employee, that friendship grows into a steamy love affair.

HIDDEN COVE has humor, great secondary characters, mystery and intense suspenseful adventure. And the point of view from the murderer only adds to the thrill.