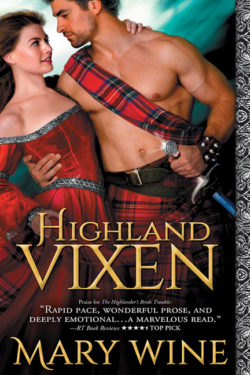 Marcus MacPherson fully intended to marry Helen Grant but he’s clueless when it comes to wooing her. She’s unlike any female he’s ever met – she doesn’t cower from him, isn’t afraid to stand up for her beliefs, and flat out refuses to marry him just because he deems it so.  With the aid of Ailis and Brenda, Helen puts herself in grave danger by leaving the MacPherson holding but her thoughts of avoiding an unwanted marriage are thwarted when Marcus is put in chains and commanded to marry a fourteen year old young woman, Katherine.  In order to save Katherine, Helen and Brenda devise a plan and arrange for Helen to marry Marcus before James Stuart’s regent, the Earl of Morton, can carry out his dastardly plan.  Of course, Helen’s under the impression that obtaining an annulment afterwards will be relatively simple.  Marcus surely wouldn’t make the process difficult.  She couldn’t be more wrong.  Marcus fully intends for their marriage to be irreversible – anything less is unacceptable.

Mary Wine held me captive for several hours with HIGHLAND VIXEN. I started reading and found myself quickly immersed in Marcus and Helen’s story.  Their stubborn natures and ‘in your face’ dialogue kept me giggling and waiting for the moment when they finally succumb to their mutual attraction.  There’s one particular scene where they’re battling it out and the priest catches them at it and gives them both penances – Helen’s reaction to it had me laughing out loud since technically she’s following his instruction and at the same time ensuring that there’s no doubt she’s not conceding the argument.  This story was full of political power plays, manipulative maneuvering between clans, romance, friendship, and plenty of unanswered questions and open-ended situations that guarantee readers will be anxiously awaiting the next story in the HIGHLAND WEDDING series.   If I have any complaints about this story it’s simply that I felt that Brenda’s plight was ignored even though she was key in the plot to save Katherine.

HIGHLAND VIXEN is the second title in Ms. Wine’s HIGHLAND WEDDING series. I’m fervently hoping for at least two more titles in the series for characters I really want to revisit in the future – Brenda and Katherine.