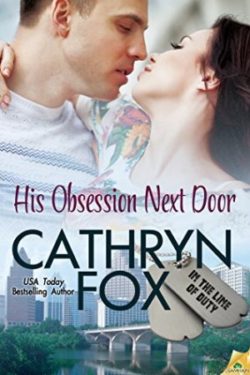 Cole Sullivan has never forgotten the promise he made to Brandon, his best friend. Just before Brandon died Cole promised that he’d take care of his buddy’s little sister, Gemma.  It was an easy enough promise to keep while he was overseas.  Now that he’s stateside, he’s discovering that Gemma isn’t a little girl anymore – and making sure she’s safe and sound isn’t all he wants to do for her. He needed her help after his dog, Charlie, was seriously injured – and she’s a great veterinarian so he took his dog to her and that’s how she found out he was back in town.  He also neglected to tell her that he’d purchased the condo directly across from hers.  Gemma’s not amused with his whole overly protective brother routine and gets rather creative with her seductive techniques – after all if he’s going to be living that close to her she might as well give him something to watch, right?

Cathryn Fox tells an endearing tale with the first title in her IN THE LINE OF DUTY series, HIS OBSESSION NEXT DOOR. Friendship, military veteran issues, animal shelter concerns and romantic entanglements all play a pivotal role in bringing this story to life    I adored Cole and his determination to keep his hands off Gemma (even though that was doomed to fail) and really love the plan he came up with to help her with the animal shelter overpopulation.  Gemma’s a determined woman who isn’t afraid to go after what she wants, and she’s wanted Cole for a very long time.  HIS OBSESSION NEXT DOOR is an emotionally charged read that pulls readers into the story and holds you captivated until the very end.  The passion between Cole and Gemma is scorching hot and only tempered because of Cole’s guilt over what he perceives as betraying his promise to his friend.   Cathryn Fox is an awesome storyteller who pours plenty of eroticism and emotion packed drama into her writing that guarantees readers will keep coming back for more.

IN THE LINE OF DUTY series:

HIS OBSESSION NEXT DOOR

HIS TROUBLE IN TALLULAH

HIS TASTE OF TEMPTATION

HIS MOMENT TO STEAL

HIS REASON TO STAY