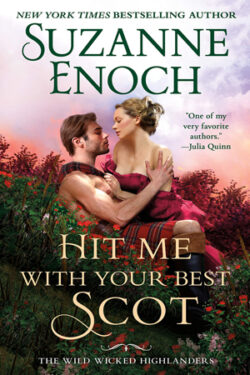 Coll MacTaggart, Viscount Glendarril, is the eldest sibling. He must marry before his sister’s nuptials, or he will lose funding to his Scottish estate. Coll intends to find his own bride. While escaping his mother’s latest matchmaking, he happens upon Persephone Jones. The actress appears to be the answer to all of Coll’s needs. First, he needs to protect her against a mysterious threat. Can Coll keep Persephone safe? Will he risk everything to marry her? And what other trials must they overcome to be together?

Persephone Jones is a renowned actress. She has another identity; one she strives desperately to keep hidden. When incidents start to happen, Persephone turns to Coll for help. She offers to tutor him in gentleman courtship etiquette in exchange for protection. However, Persephone finds herself falling in love with the temperamental Highlander. Can Persephone trust Coll with all her secrets? Will her true identity be exposed to the public? Or are the accidents due to a curse?

Coll is my favorite MacTaggart. He has a strong sense of duty, especially to those who depend on him for their livelihood. I love Coll’s protective nature. He intentionally uses his height and brawn to frighten unwanted attention from Persephone instead of his title. I adore Coll’s intelligence. Most people assume he’s slow-witted due to his size and nationality. He is not afraid to play that role so others will underestimate him. What I admire the most about Coll is his decision to abstain from alcohol in public. He is well aware of his behavior while intoxicated, so he takes steps to spare his family and staff that side of him.

Persephone is no weak-willed heroine. She is a woman who learned to stand on her own two feet against public scrutiny in a time when women had few prospects. I adore how Persephone never once prejudged Coll based on his appearance or race. She treated him as she would any other. Persephone actually took the time to get to know the man beneath the façade. What I admire the most about Persephone is her bravado to escape an unwanted life. She willingly walked away from a privileged life and found her own path. Plus, Persephone did so on her own talents.

HIT ME WITH YOUR BEST SCOT is book three in Suzanne Enoch’s historical romance series, WILD WICKED HIGHLANDERS. The story can standalone; however, to understand the overall situation, it is necessary to read the prior two books. My only nitpick is that there is no clear resolution between the Earl and Countess Aldriss, Coll’s parents. I wish the author would have spent time doing so. Unless, of course, she plans to do just that but, in a novella, or another book.

HIT ME WITH YOU BEST SCOT is an entertaining tale about two people finding what they need. I hope the author considers writing a book about Gavin, MacTaggert’s groom, as well as, Jane, Amy’s cousin, or possibly both.