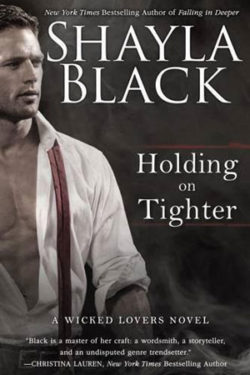 Julie Quinn is driven to make her fashion company a rousing success and has put any thoughts of romance out of her mind. She’ll leave that fanciful notion to her mom and sister.  The trouble is that her sister, Karis, has decided that their new security contractor, Heath Powell, has a crush on her and has been leaving gifts on her desk.   Julie confronts him with full intention of telling him to stay away from her sister; instead she ends up provoking him.

Heath enjoys the challenge associated with protecting others. He spent years protecting Mystery Mulins (WICKED FOR YOU) and before that worked for the British government as a MI5 agent.  He has his own tragic story for why he doesn’t get involved with women.  He doesn’t date; sex is perfunctory and enjoyed with whichever willing woman is available.  However, Julie intrigues him and he can’t deny she presents a challenge he can’t resist.

With someone delivering gifts to her sister, threatening notes, a break in at her company, Julie’s decision to take on an investor, and a few other troubling issues plaguing them it’ll fall to Heath to protect Julie and her company. Being in such close proximity 24/7 makes it impossible to resist their intense attraction to each other but there’s far more than their hearts at risk with this arrangement and Heath’s just hoping that he can uncover the source of the danger before it’s too late.

HOLDING ON TIGHTER is the latest addition to Shayla Black’s WICKED LOVERS series – and what a wickedly delightful read it is. I loved getting the opportunity to revisit Heath, whom I remember well from WICKED FOR YOU.  There was just something about him that ‘spoke’ to me and I wanted him to get his own happily-ever-after.  Julie’s a multi-dimensional character who comes off as a bit of a control freak but as the story progresses it becomes obvious that she’s extremely driven to succeed and has good reason to have rejected the idea of ‘love.’   HOLDING ON TIGHTER is a fast paced story full of passion, angst, betrayal, friendship, humor and the opportunity to revisit many of the characters from previous WICKED LOVERS books.  Now I’m anxiously awaiting the next addition in the series since the epilogue hints at a major confrontation between Cutter and One-Mile over a woman and I’m dying to know what happens.

The WICKED LOVERS series is rather extensive but each story can easily be read as a stand-alone. However, fair warning, you’ll end up getting hooked and want to read them all.

WICKED ALL THE WAY