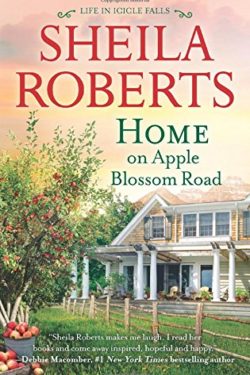 After her mother became sick, Mia was taken in by Grandma Justine, who was her mom’s best friend, and her family. Although they were not blood relations, the family became Mia’s when her mom passed away and her loser father took off. She and Justine’s grandson Colin had become inseparable and he became her hero. Although she and Colin talked of spending their lives together, Mia never felt that she measured up. So she set out to prove that she was worthy of them by getting good grades and being accepted to an outstanding college, even though it was in another state. But the distance played havoc on her and Colin’s relationship. They broke up and she found a position in Chicago after college. Her visits to her hometown of Icicle Falls were rare.

While growing up, Colin and Mia worked on Grandma Justine’s orchard before she had to downsize and subsequently sold it. After high school, he went to college and obtained a degree in agriculture, dreaming of one day owning his own sustainable orchard. Always his dreams included Mia as his wife, but when they parted ways, he moved to Seattle and went to work in a grocery warehouse. However, he has never forgotten his dream.

When Grandma Justine passes away, Colin and Mia return for her funeral. Mia has been recently promoted and needs to get back to Chicago, but she is forced to stay in Icicle Falls when the will is read. Mia and Colin have been left something jointly and to find it they will have to follow the clues in a carefully planned treasure hunt, like the ones Grandma Justine planned for them when they were young. But what they discover at the end may be more precious than the bequest itself.

A heartwarming tale, HOME ON APPLE BLOSSOM ROAD, the ninth book in author Sheila Roberts’ LIFE IN ICICLE FALLS series, is an uplifting, love-filled contemporary romance that will leave you feeling good. The love between Colin and Mia is palpable, but misunderstandings tear them apart. I enjoyed watching them grow and learn to trust each other, even trying to move on to other relationships, before discovering what was really important. The small town setting and close family dynamics, as well as the interaction between Mia and Colin, will touch your heart.

Readers are sure to fall in love with this town and its residents, leaving them longing for a return visit. Beautifully written, the characters are true-to-life as they deal with their pasts and face the consequences of their actions. Each book in this series can be read as a standalone, but after reading this one, I am sure you will seek out more of Ms. Roberts’ works. Whether you have read any of the other books in this collection or not, be sure to pick up a copy of HOME ON APPLE BLOSSOM ROAD today and discover the world of Sheila Roberts for yourself!