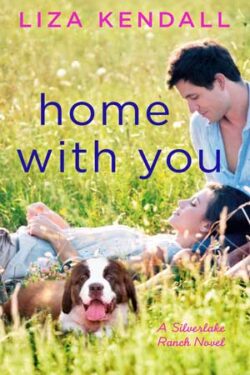 HOME WITH YOU by Liza Kendall is the second book in the Silver Ranch Novels series, set inTexas.

As a teenager, Rhett Braddock was sent to boarding school by his older brother after their parents died. He begged to come home to the ranch. His brother refused, feeling he was better off at boarding school getting a good education. Upon graduating from an ivy league college, Rhett never looked back, but headed for wall street and made his billions.

Jules Riggs manages the Riggs stables on her family ranch. She has had a crush on her older brother’s best friend, Rhett, for years. They have a chance meeting in Dallas and one thing leads to another resulting in a night of passion. However, Rhett leaves Jules the next morning without any explanation, guilt consuming him for having slept with Grady’s little sister. When he comes back into her life, sparks fly, and there are plenty of steamy scenes.

I enjoyed this romance as it also explored family relationships and the ability to forgive and move on. I would highly recommend HOME TO YOU to anyone who enjoys a well-crafted romance and likes snappy dialogue.