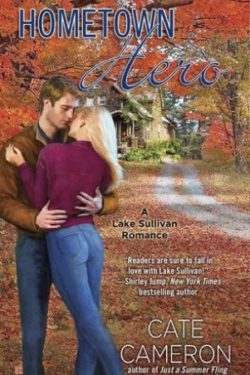 Having enjoyed the first book in the LAKE SULLIVAN SERIES, JUST A SUMMER FLING, I couldn’t wait to return and I wasn’t disappointed.  It was nice to reunite with characters we met before but also meet new ones and dig deeper into the layers of many of them.  What you see is not what you always get!

This is Zara and Cal’s story but also belongs to her older brother,  Zane.  Zane and Zara come from the wrong side of the tracks but Cal and Zane have always been best friends much to the chagrin of Cal’s family – the Montgomerys – but especially his brother, Michael, and his dad.  His mom surprised me throughout with her positive attitude and willingness to help Cal deal with their family and run interference for him but also how she embraced the classes that Zara teaches at the community center.

Zane is a newly released convict that got in trouble as a teen since he and his sister had no one to supervise them or care about them.  Zara and Cal have always been there for him and took turns visiting him in jail on a weekly basis.  Now that he’s out he has to live with his sister as a condition of his parole and that doesn’t always sit well with him.  She’s an MMA fighter who’s on medical leave after having suffered two concussions within the year.  They both are working at the newly built community center which was a pet project of Cal’s.  Cal works at the family business but he’s always chomping at the bit since he doesn’t see eye to eye with his dad or his brother about much of anything.

There are family and friends, neighbors in the tourist town of Lake Sullivan and businesses to run, as well as arguments, anger, fear, sadness, tears, laughter, happiness, romance, loving and love.  I loved the stitch and bitchers group!  What a hoot it was whenever they got together.  Zara and Cal don’t know what to do about their attraction and they are always taking one step forward and two steps back especially when they over think things.  He doesn’t want to push and she doesn’t want to hope that it’s more than it is.  When they are just themselves they seem to be on the same wavelength and then things always get hot fast!  There was nice closure and a happily ever after in the offing which was what I was hoping for.

Cate Cameron is the alter ego of author, Kate Sherwood, or as she calls Cate, her imaginary friend.  I will be adding more of Cate’s contemporary romances to my always growing TBR pile as she writes them and hope we’ll be returning at least a few more times to Lake Sullivan!